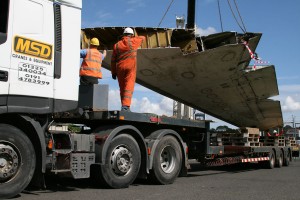 Over the past two days we have managed to reach a major milestone in the project to save Trident 1C G-ARPO. We have now moved the entire aircraft to the North East Aircraft Museum.

Yesterday, we managed to move the starboard wing and the horizontal stabiliser. Today, the port wing and tail fin were moved, along with the remaining bits and pieces that had been removed (flaps, engine casings) and a set of aircraft steps.

A minor setback on the first day saw the tail unable to fit onto the trailer as it was too long. In a last minute stroke of luck, we were able to hire the assistance of an employee at Cobham, a company based on the airport site, to cut off two small sections of the tail. We thank Chris at Cobham for his help with this – it saved us another day delivering parts and hiring equipment.

The team are naturally overjoyed at reaching this stage. However, we realise we could not have reached this position without the help of all of our sponsors to date.

Over these two days, we have had extensive help from MSD Cranes. Their workers have shown great dedication to the work at hand, and have been on hand to help with whatever is needed. We’d particularly like to thank Stan, who has worked with us on behalf of MSD Cranes for the past year during most of the dismantling progress. He’s an honorary member of the team, and quite an expert on the Trident by now!

In addition to MSD, we couldn’t have completed the move if it wasn’t for JDPL and Colin Best. They planned the route and arranged the escort up to the museum over the three move days. A lot of background work went into this, which we really appreciate. They organised the police support, who have again been excellent over the past two days.

St George Hotel at Durham Tees Valley Airport has helped us out with accommodation many times over the course of the project so far. For us, it was always a pleasure to stay at such a nice hotel, and the bar was always a great place to meet up and debrief.

Serco have been incredibly helpful with this project. Today marks the end of our work with them, but we’d like to think we’ve made some good friends and colleagues at the International Fire Training Centre– particularly Chris and Sean, who have always been on hand to help us whilst working on site. We thank them all for this, and for giving us the opportunity to save this historic aircraft.

Today we also had support from Auto Recovery Services, and Mick from Palis Transport. We thank them very much.

G-ARPO is now at the North East Aircraft Museum. The fuselage is currently in the car park, so you can get a close view of her. Please also have a look at the other great exhibits at the museum, and speak to the various teams working on different restoration projects. It really is a treasure trove of amazing aircraft and military vehicles.

The team will now begin planning the next stage of the project, and we will hopefully be moving the fuselage alongside the other parts in the near future. From there, we can begin work on the restoration.

Here are some pictures from the wings and tail move. More will follow soon, so keep checking back!

One thought on “Trident Move Complete!”