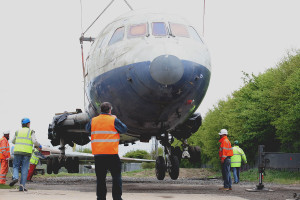 We’re almost at the end of 2013, so it’s time for a look back at what we’ve achieved over the past year in our bid to save and restore Trident 1C G-ARPO.

Carpets
At the end of 2012, Franks Factory Flooring came to the rescue with a sponsorship of carpets and fitting in the forward cabin of G-ARPO. We were so impressed at how this transformed the interior and gave us a taste of how the finished product might look.

Lighting
We set about installing a power supply to allow us to add working lights in the cabin of the aircraft. Initially we set up lights in the forward cabin and toilets.

Relocation at the museum
Since arriving at Sunderland G-ARPO had been sat in the museum’s car park. In May 2013 it was time to move, and we hired cranes to lift the fuselage gently onto a new display area near the museum entrance. This necessitated a few lifts as we had to get the aircraft underneath a telephone wire. In its new position G-ARPO is visible to all who come to the museum, and is much more accessible.

BAC 1-11 Engines
We had an opportunity to take the Spey engine casings from a retired BAC 1-11 at Boscombe Down. These will be used on our Trident as they are identical, and replace missing parts from our aircraft.

Aircraft Log
We have continued finding former pilots who flew G-ARPO and collecting details from their logbooks. Over 150 pilots have now sent in their flights, and we continue to search for more. Please get in touch! 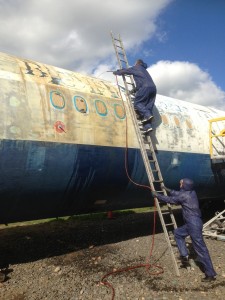 Exterior Work
In the summer we started and completed the long process of sanding the exterior of the aircraft, and then treating it with Alochrome ready for painting. Sadly we were not able to paint the aircraft before the winter arrived, but this is a priority for 2014.

Fundraising
We set ourselves a target of raising £3,000 in 2013 through donations, and we were overwhelmed at the response. So many people gave us gifts which allowed us to do all of the things listed above. It can be very expensive hiring equipment and workers, and purchasing materials for the restoration process.

Looking ahead, our main priorities for 2014 are to paint the aircraft exterior in Northeast Airlines colours. We have already received the paint for this, and now just need to find a time that is suitable (good weather and enough workers available). In addition to this we aim to open the forward cabin to visitors at the museum, giving a first-hand experience of the interior of a Trident 1C – one of the greatest aircraft to have been produced in Britain. Work will also continue on the cockpit and rear cabin restoration.

In order to do this we need to continue raising money. We will be adding a new fundraising target for 2014 and working on new ways of raising money. If you can help support this project, either by donating money or volunteering to work on the restoration at the North East Land Sea and Air Museum in Sunderland, please get in touch. If we are unable to reach our target in 2014 we may not be able to continue at the same pace.